Check out the other 2022 Gallardo Award awards here.

The M-SABR Gallardo Awards, originally conceived by alumni Cam Cain and Sahil Shah, are given to the worst players in baseball. The previous editions in 2018 (AL/NL) and 2019 didn’t mimic every MLB award. This changes in 2022.

This is the tenth and final article in the series for the 2022 season. This article breaks from the others. It won’t be honoring the worst players in baseball, but instead will honor those who have reemerged after a terrible 2021 season. The Redeem Team is our All-MLB Team, in effect. The Stevie Wilkerson Award for Position Player Pitching Excellence will also be given out.

Unlike MLB, we are actually going to give Brandon Hyde an award. What his team accomplished this season was nothing short of astounding. If you told me you expected this Baltimore Orioles team to have a 31-win improvement (!) from a year ago, I would call you a bald-faced liar. The O’s finished the 2021 season with 52 wins, but somehow they cobbled together a squad that very well could have secured a 2022 AL Wild Card spot if some balls bounced in different directions.

It’s hard to quantify the positive value a manager can give to a ball club. Fans will always point out the poor lineup decisions or bullpen gaffes a “bad” manager could cook up, but outside of winning more games than expected, fans could be content with a guy that just makes the common sense choices. I’d argue that the Orioles at least winning more than 52 games in 2022 was the expectation, but this large of a jump makes it seem as though Hyde concocted something really special in the clubhouse.

To speak to the chemistry in the clubhouse, in an article with Baseball America, it was outlined that Hyde tried to exude a positive atmosphere among the players, even when the O’s were extremely stinky on the field. This was a young team. To have a manager that encourages guys to keep their heads up is very beneficial to keep confidence from wavering.

It’s no coincidence then, that Baltimore had breakout seasons from many of its younger players. Beyond Adley Rutschman, whose historic rookie catcher ranking can be seen below, the term “breakout” could be relative. Jorge Mateo couldn’t hit for s**t, but he did everything else well. It was the same for Ramon Urias to an extent. 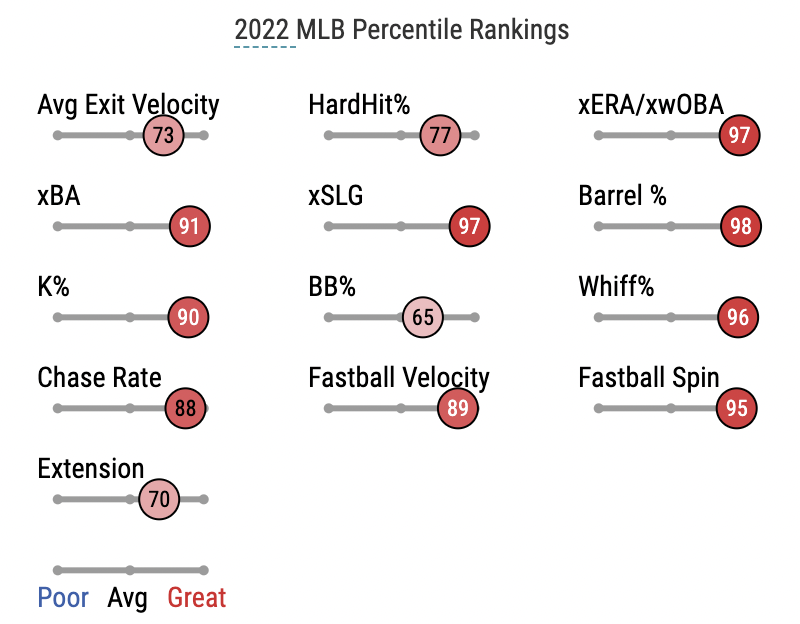 As if having Emmanuel Clase, Sam Hentges, and James Karinchak wasn’t enough, Stephan only added to the young Guardians squad that nearly made it to the ALCS. There’s nothing much more to say other than after another year of growth with Cleveland’s wizardly pitching staff produced a positively disgusting Savant page.

As long as your WAR isn’t negative at catcher, it seems like you can get a job. That’s the territory Victor Caratini needed to enter in 2022 to stay relevant, and that’s exactly what he did. Bouncing back from a career-jeopardizing 2021 campaign in San Diego, Caratini assembled quite possibly the most valuable season of his career.

On a Milwaukee squad that desperately needed offensive production, Caratini posted a passable 84 wRC+ at catcher in the half season of games he played. Given his offensive deficiencies, most of the 1.2 fWAR generated by Caratini was behind the dish. He was a 66th percentile framer in 2022. However, Caratini struggled down the stretch, and he could soon be replaced by the new-look Brewers front office.

Sandwiching two great months between some mediocre ones, Walker’s 2022 season continues his tenure as one of the most unpredictable players in MLB. Languishing as a taxi squad player before his breakout 2019 season, Walker’s 2020 and 2021 season left much to be desired, and as he entered his thirties, it was a question of when, and not if the youthful Diamondbacks would pull the plug.

They’ll have to wait and see what he offers in 2023 after having the second-most value increase on this 2022 Redeem Team. Harkening back to 2019, Walker finally rediscovered his ability to make hard, quality contact. It also helped that the 2022 Gold Glove winner was the best defender at his position in all of MLB. It remains to be seen if Walker can remain consistent throughout a full season, though, as his monthly OPS+ splits from April-September went 69, 159, 112, 82, 190, and 121.

Even if there was another candidate to put at this spot, which there really isn’t, I still would’ve been tempted to put Harold Castro here. He’s only my favorite player in the league. One might wonder: Why, William, is MLB’s worst defender, and a guy who can barely get on-base effectively without hitting close to .300 your favorite player?

Repeat what you just said, and you have your answer. I love that this guy got to keep trotting out there for my Tigers only to hit singles. It was hilarious. He is the platonic ideal of the Latin player that refuses to strike out. He is a dinosaur in the modern MLB. I hope that every team can roster a Harold Castro of their own.

As the only player on this list with negative WAR, how is it possible that Castro was the third best hitter by wRC+ on the 2022 Tigers with over 300 plate appearances? Beats me, I’m just glad that the guy who kept insisting he was a capable middle infielder is no longer employed by my favorite team. I’m sad to see Hittin’ Harold go, but I’ll always believe in him.

The newest Cincinnati Red (they actually added a major leaguer?) was a part-time player for the Pirates this season, and it’s not hard to see why. Although he added 1.4 fWAR from last season to this one (finished with -0.1 fWAR in 2021), he was about the most average shortstop you could imagine.

In just over 300 plate appearances, Newman was pretty good in a lefty platoon split, but he was so dire against righties that the Buccos couldn’t justifiably keep him in the lineup, even if said lineup was a veritable train wreck. Combine that skillset with slightly below average defense, and you have the perfect utility infielder for a bad team. I now see why Cincinnati acquired him.

The funny thing about Suarez’s rebound is that Jesse Winker, the player ostensibly attached in this deal to make Eugenio’s poor contract (at the time) more palatable, stunk in Seattle, and Suarez turned in a resurgent season. I guess it turns out that if you put a guy where he belongs on the diamond that he’ll probably play better.

He’s still the same high-strikeout, quality contact Suarez we’ve come to appreciate since the Tigers traded him away for Alfredo freakin’ Simon, but he somehow alchemized his -17 Run Value on sinkers in 2022 to +10, which is the best he’s done against a particular pitch since his MVP-caliber season in 2019.

He’s entering his mid-thirties, and while his defense is declining, he represents a pretty good Kyle Seager replacement for the M’s on a contract that was questionably seen as an albatross by Cincinnati ownership. If he can keep up the 30-homer pop, Suarez will be a player on one of the friendliest contracts in MLB with two seasons of about $11 million owed each, with a $15 million club option for 2025.

Shoutout @RaysMetrics on Twitter, one of the best follows on that platform, Rays fan or not. That account put me onto Harold Ramirez being a great platoon option before the season began, and they were correct. It’s not like he’s some big bat, but he was such an under-the-radar Rays’ acquisition that not even the offensively depleted Cleveland Guardians wanted to bring him back.

Almost all of Ramirez’s value comes from a nasty .873 OPS against lefties. The problem is there isn’t really anything else remarkable about his game. He can’t hit righties, barely plays defense, and doesn’t walk. However, for a guy clinging to the fringes of the bigs, he clawed out a nice little career year.

Ugh. You have to wonder if this could be the last award that Cody Bellinger ever collects. The newest Chicago Cub signed for just under the $18 million arbitration amount demanded by the Dodgers. With his recent play, it won’t be weird to see him in a different uniform, unless you’re a Cubs fan that just timewarped from 2019.

Cody Bellinger was so bad last season that a nearly three-fWAR increase from a season ago doesn’t even qualify him as an average MLB starter. Nowadays, all of his value is derived from 90th percentile center field defense, so even if he hits like a high schooler, he can be a net positive to a team. A rich man’s current version of Jackie Bradley Jr.

I hope Belli can figure it out, but I don’t think it will happen. If he can parlay this one-year prove-it contract into something bigger, congrats. However, for the time being, you’re being honored for kind of rebounding from the Monstars sucking away your ability to play baseball.

On a team replete with superstar names, even before trading for Juan Soto, Jurickson Profar was the fourth most valuable position player on the Padres. That Jurickson Profar? The same one that got called up too early by the Rangers (not too uncommon) and his development went off the rails?

Yeah. He’s pretty much the same guy he’s always been, but a combination of regular playing time and BABIP luck allowed for such a big jump. He was a negative value guy last season, mostly because of his atrocious defense, but now he’s upgraded to being just a poor left field defender. To be a slightly above league average hitter with that kind of defense represents a free agent who will probably be overpaid by the White Sox, or something.

The good news is that whoever signs him won’t be receiving a player whose bat will fall off of a cliff. Profar doesn’t strike out often, and he walks a lot. He struggles making hard contact, but would be a boon to a light-hitting lineup. He’s a solid free agent now. Just don’t give him $10 million AAV.

I just talked about the White Sox being stupid two paragraphs ago, but man has this iteration of the team been depressing. Not only has your veteran Cuban first baseman left for the reigning World Series Champs, the younger, supposedly superstar-caliber Cuban players have left much to be desired.

Eloy, once one of the games’ most-hyped prospects turned in a solid half-season, that probably would’ve gotten him All Star buzz had he stayed healthy. I’m just not really impressed. Of the four big league seasons in which he’s played, the only years where his offensive production covered up his defensive deficiencies were the ones that he outpaced the league average BABIP by around forty points.

Eloy Jimenez is by no means a bad player, he’s on this list because he excelled offensively in the small sample size he gave us to analyze in 2022. He’ll need to use 2023 to prove that, while now growing past the approximate age of a young player still putting it together, he can be a consistent bat. My doubts are vested in his luck regressing to the mean, and his negative defensive value in a lineup filled with players that could be better off at DH.

Hanser was more valuable as a pitcher than as a hitter this season. His 0.1 bWAR as a soft-tossing righty is just ever-so slightly more than the neutral 0.0 bWAR he had as a hitter. Fangraphs was even harsher, widening the gap between the two numbers to 0.4 (-0.1 pitching fWAR; -0.5 hitting fWAR).

I don’t even understand why the Dodgers kept rostering him, other than his clubhouse impact, but it seems like they gave him the season to showcase his awesome stuff before declining his team option shortly after the offseason began. Who knows if he dons an MLB uniform again.