The Detroit Tigers starting rotation was a definite bright spot for the team last year. Looking ahead to the next season, Matthew Boyd will return from injury along with young guns Casey Mize, Tarik Skubal, and Matt Manning. Tyler Alexander will hope to extend a nice finish to the 2021 season and fill the swingman/sixth starter role that Tigers fans hoped the recently-traded Daniel Norris would have filled. However, late-blooming Spencer Turnbull is out for the year after undergoing Tommy John surgery, which leaves a spot in the rotation for another proven arm to provide steady innings.

The bullpen for Detroit featured some surprising stories. Journeyman Jose Cisnero has put together three straight quality seasons after being signed out of the Mexican League, Gregory Soto proved his pedigree as a former organizational top prospect, and former Rookie of the Year winner Michael Fulmer stepped into the closer role when healthy and pitched to a sub-three ERA. Those three players combine with former highly ranked organizational prospects Alex Lange and Kyle Funkhouser to constitute a nice, controllable, and flexible bullpen entering 2022.

However, too many of Detroit’s relievers are right-handed. Of the pitchers on the 40-man roster, only six are left-handed, and two of them are full-time starters. It was such an issue last year that the Tigers DFA’d and lost former first round pick Beau Burrows for a left-handed journeyman in Miguel del Pozo. Joey Wentz is another lefty, but has yet to pitch a major league inning after undergoing Tommy John surgery. Unless Ian Krol isn’t brought back for a third time, the only proven lefty reliever signed to a major league contract is Gregory Soto.

With the trade for Tucker Barnhart, the big question about the catcher position has been answered after the injury to Jake Rogers. Although Eric Haase is not capable of being a full-time starter because of his defensive liabilities, Barnhart is a top catcher in regards to framing and should compliment each other well.

As for other options at catcher in the organization now that Barnhart has been acquired, a depth catcher in Toledo is needed. Grayson Greiner is out of options and has entered the first year of arbitration. Dustin Garneau, an in-season addition following the Rogers injury, is also in arbitration. Neither player should be worth more than the minimum. The Tigers could either sign an above-average framer like Manny Piña in free agency to be a full-time backup and use Haase as depth on the 40-man roster, or they could trade for a younger, fringe catcher with options.

On November 3rd, the Tigers sent 2019 second round draft pick Nick Quintana to the Cincinnati Reds for Tucker Barnhart in a one-for-one swap. The Tigers will pick up the entirety of Barnhart’s $7.5 million team option for 2022. The move signals a tear down of a disappointing Reds’ team that had invested quite a bit of money for a 2021 playoff push, especially with the opt-out of Nick Castellanos and subsequent waiving of team rWAR leader Wade Miley. For the Tigers, however, it may be the prelude for what will be a busy offseason for the organization. Below are thoughts on the Barnhart deal before it was made, with some added commentary. 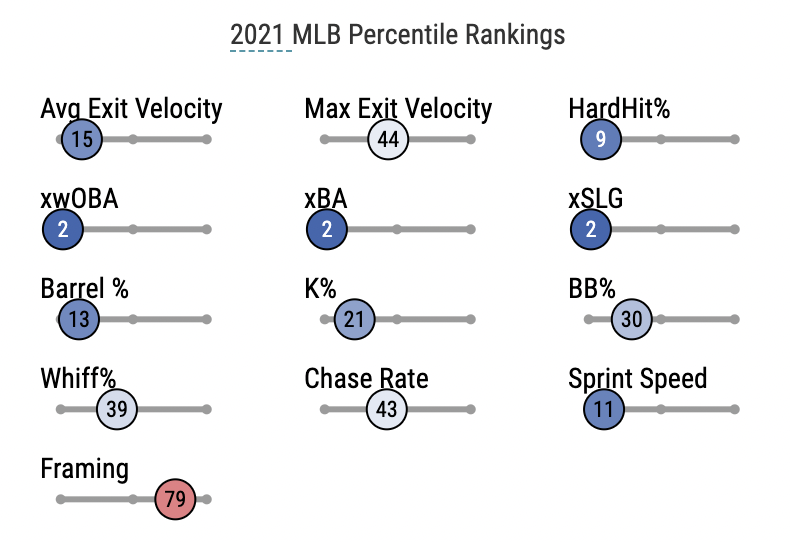 Tucker Barnhart’s offensive decline is concerning, especially now that he will be past 30 years old. Looking at his Baseball Savant percentile rankings, he could be considered one of the worst overall offensive players in the sport. Luckily for the Tigers, Barnhart is still one of the best pitch framers in MLB. This is an aspect of the catcher position that was lacking for Detroit in 2021, as both Rogers and Haase were in the bottom 10 percent in the metric. Per Baseball Prospectus, Barnhart was the 13th-best defensive catcher in 2021. Barnhart became the primary catcher for Wade Miley during his resurgent season this year, to the point where the left-handed Barnhart was getting regular starts against left-handed pitching. He will be an asset in the maturation of the Tigers’ young pitching staff.

The lifelong Cincinnati Red is a two-time Gold Glove winner and has a career 83 OPS+. Lately though, he’s strung together two relatively subpar seasons with 75 OPS+ in both 2020 and 2021, but he could still be valuable for the Tigers. However, he is not an offensive detriment against right-handed pitching with a career 89 WRC+. The Tigers top three catchers under team control are righties and Barnhart’s bat will support a reasonably strong platoon with Eric Haase in 2022. Barnhart will also fit well with the injured Jake Rogers and prospect Dillon Dingler in the near future if the Tigers choose to offer him an extension.

Jon Gray may not be the big name that Tigers fans would have hoped for, but with a large contract soon to be given out to a shortstop, it’s not very probable that the Tigers would break the bank for someone like Carlos Rodón, or even Justin Verlander. Gray is in the tier of 2022 free agent starting pitchers below that of those pitchers who have won or competed for Cy Young awards. However, Gray is entirely capable of being Detroit’s third starter for 2022.

2021 represented a career resurgence for Jon Gray. His last full season in 2019 produced good surface results with a sub-four ERA, but his xERA was almost a full run higher than his career average. A fourth percentile hard-hit percentage of 43.8% contributed to this. The shortened 2020 was not kind to Gray either, as he had a strikeout rate in the bottom one percent of the league with a 5.85 xERA, albeit in only 39 innings. He excels at inducing low launch angle and struggled to do that in 2020. Pitching at Coors Field has caused Gray’s ERA to fluctuate season-to-season, while his expected stats have stayed consistent, as you can see by his year-to-year stats from 2016-2021. In 2021, his xERA was closer to his career benchmark of around four as well as some of his peripheral statistics proving to be better than previous successful seasons in 2017 and 2018, namely the metrics tied to xSLG, which ranked in the 61st percentile.

2021 represented a career-low usage rate of Gray’s four-seam fastball, only throwing it 47.6% of the time. It coincided with a career-high usage rate of Gray’s slider, which was thrown 38.1 percent of the time. Gray’s put-away pitch is his slider, and it has cleaned up a lot of the mess that his four-seam fastball has created over his career. In 2021, Gray’s four-seamer was tied for the fifth-worst pitch in the league, while his slider was tied for the 43rd best. It’s quite incredible that a 2.3 fWAR pitcher’s primary offering was up there with Matt Harvey’s 2021 fastball. Gray’s fastball spin-percentile ranking has never been higher than 30th in his career, which is good to induce ground balls in a stadium like Coors, but in a transition to a new team, he will need to change his approach with that pitch to remain successful.

Jon Gray was not tendered the qualifying offer from the Rockies for this offseason. He presents a unique opportunity for the Tigers to sign a quality, consistent, veteran arm to a relatively cheap contract. Gray won’t cost Detroit any compensatory draft picks, and his contract should expire before the escalating arbitration costs of Mize, Manning, and Skubal. Jon Gray isn’t Justin Verlander or Carlos Rodón, but with an evaluation and retooling of his repertoire by the Tigers’ pitching staff, Gray could achieve a high return on investment for Detroit.

Joely Rodriguez has been a solid contributor to the Rangers’ and Yankees’ bullpens over the past two years after two seasons in Japan. He’s a master of soft contact with a great profile for dismantling power hitters. Detroit’s incumbent headlining lefty Gregory Soto, along with much of the rest of the bullpen, is a strikeout artist, and has struggled to keep the ball in the park as well giving batters too many free passes to first. Despite this contrast, Soto and Rodriguez had a 2021 xERA of 3.60 and 3.65 respectively. 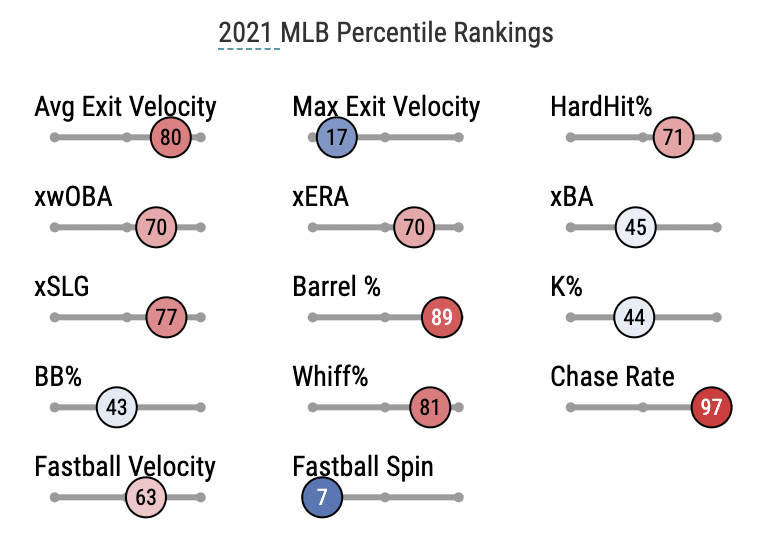 Two quality, left-handed, sinkerballers who produce good results is a boon to any major league bullpen, but the ability to roll two of them out there with differing approaches will keep hitters on their toes, and provide diversity in a bullpen that lacks it. You won’t be getting on the Rays level with differing pitch shapes for every bullpen arm, but it’s diverse enough. It’s a bit of a crapshoot when signing relief pitchers to big contracts given the season-to-season volatility of the position, but the Tigers need to invest in a player like Rodriguez to truly round out their bullpen in order to become competitive.

Adam Morgan is another left-handed relief option that can provide even more contrast in a bullpen including Rodriguez and Soto. Unlike Rodriguez, Morgan would be an acquisition taken off the top of the scrap heap. He would represent more of a lottery ticket as he hasn’t thrown more than 30 innings since 2018. If Morgan can return to form in 2022 as a solid lefty middle reliever, he would be regarded as an excellent addition. If he doesn’t, his relatively small contract would not be a detriment to the team.

Morgan features a low-80s slider as his primary pitch, and it fairs well, providing a -6 Run Value in 2021, per Savant. In the seasons after he was sent to the bullpen after starting his career in the rotation, Morgan was a quality reliever with a FIP of 4.08 from 2017-2019, but he hasn’t qualified for Savant’s percentile rankings since 2018 due to injury. The common denominator was his ability to pair his excellent slider with one of the other five pitches in his arsenal. Of his four remaining secondary pitches, only his changeup has not been an above average pitch. 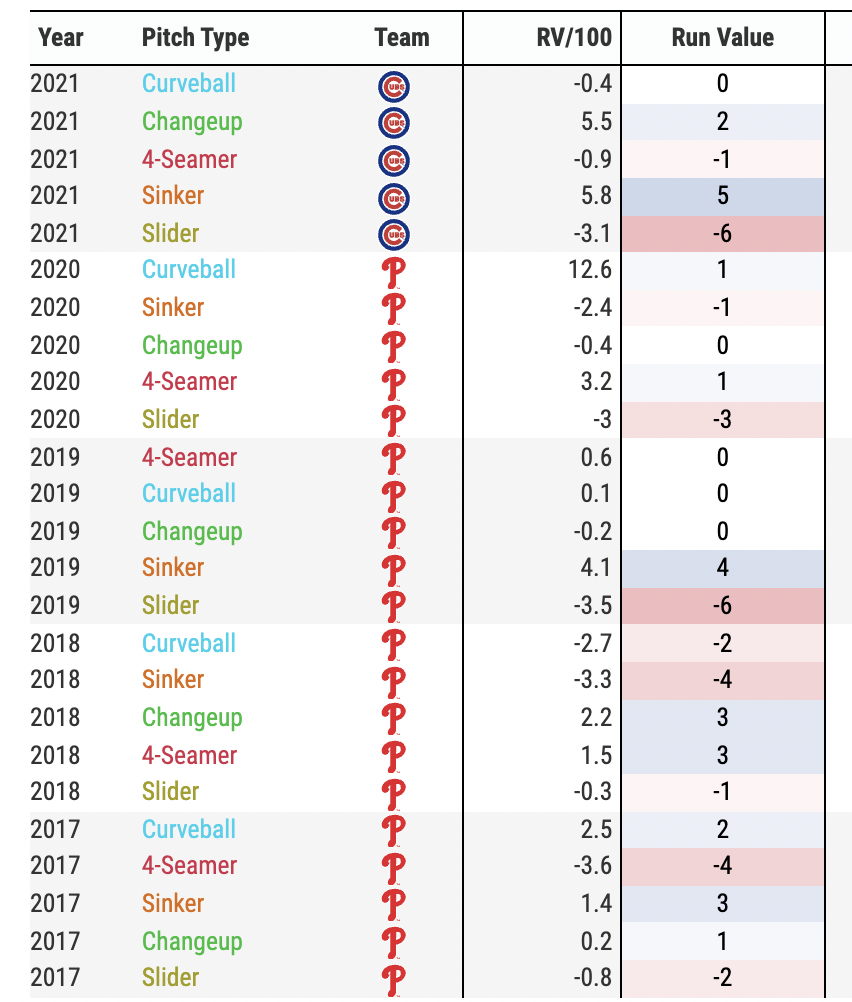 There isn’t much else to say about Morgan, other than that he has been a quality pitcher when healthy and he fits a need for this current Tigers team. His deep arsenal of pitches is a great thing for Detroit’s pitching coaches to be able to extract the best possible player from within. He should be able to be signed for about $1 million, and could end up being a valuable signing for the Tigers if he can stay healthy.