This is the second of three posts about the Tigers’ free-agent plans by position. You can find the article about infielders here.

Even after Rule V Draft selection Akil Baddoo’s breakout rookie season and Robbie Grossman’s career year, the state of the Detroit Tigers’ outfield in 2022 remains a question mark for this offseason and beyond. Baddoo and Grossman were two shrewd acquisitions by the Tigers front office in the 2020 offseason, and this free agency period may require similar maneuvering.

Al Avila and company took advantage of the canceled 2020 minor league season to pluck Akil Baddoo from the obscurity of A-ball and call him up to the Show. He responded to the promotion with early-season moments that seemed to have come from a Hollywood movie script, and an overall captivating rookie year.

Robbie Grossman was an unheralded, relatively cheap free-agent signing. He offered Gold Glove-caliber defense in the corner outfield, as well as an excellent eye at the plate. A more unexpected contribution, though, was Robbie’s career offensive year: his home run total of 23 more than doubled his previous career-high of 11, and his 2.8 bWAR was good for third on the team this year.

Without Baddoo and Grossman’s accomplishments, though, the Tigers’ 2021 outfield would have seen a dearth of offense. There are options in Toledo, but one would struggle to say they would still be in the organization over the next two or three years. Former first-round draft pick Derek Hill was below average offensively in 150 plate appearances, and his diving efforts in center field led to injuries throughout the summer. However, he should be a piece of the club moving forward. Daz Cameron, a player acquired in the Justin Verlander trade, has yet to prove himself to be a regular major leaguer. He has shown flashes, but is now quickly running out of time. JaCoby Jones showed his resurgent 2020 season to be a fluke with a .460 OPS in 2021. Victor Reyes finished strong, but has yet to capitalize on all of his raw talent. Eighth-round pick Jacob Robson has been a nice surprise in Toledo, but may just be organizational depth. The Tigers’ top outfield prospects should be cycling these players out in the near future.

Riley Greene and Spencer Torkelson need no introduction. Greene shows maturity beyond his years, and some argue that his bat is major league ready. Where Torkelson will spend the majority of his time on the diamond remains to be seen, but he certainly will get some reps in the corner outfield. With each having yet to spend a full season in Toledo, the two of them most likely will start the year with the Mud Hens, barring breakouts in Spring Training. Daniel Cabrera and Parker Meadows are a bit further away, but are close enough to factor into decisions for the big league club.

With Baddoo and Grossman established as starters and Torkelson, Greene, and others waiting in the wings, the Tigers may be cheap in their outfield spending. There is also a possibility that they commit to winning now and spend on a big bat. No matter the strategy of the free-agent period, there are issues they need to address. Out of the four players just mentioned, only Torkelson bats right-handed. Derek Hill does as well, but his spot on the roster will be earned with his glove. The Tigers need a veteran righty bat in the outfield to platoon with lefties Akil Baddoo and Riley Greene. They should look for a buy-low candidate for another proven bat. It would also behoove them to acquire injury insurance for Derek Hill that is able to keep up his level of defensive play in center field. This free agency class presents great options for a team with those needs.

Akil Baddoo had a .214 batting average in 2021 against left-handed pitchers. As long as he produces like that, the Tigers need to platoon him. Without any proven in-house options, a player like Tommy Pham could be a nice get at a reasonable price. Coming off a down season in San Diego, Pham is looking to re-establish himself as a quality major league player entering his mid-thirties. The Tigers should be looking for buy-low candidates, in order to maximize their payroll as a mid-market team. If Detroit wishes to compete with the roster as currently constructed, they need a veteran in this spot. Daz Cameron continues to underachieve. Spencer Torkelson has yet to take an MLB at-bat. Eric de la Rosa, a righty who put together a surprising 2021, is still in Erie. His stats are below. Tommy Pham is a stopgap to shelter Akil Baddoo from facing lefty pitchers as well as bridging the gap between current and future right-handed outfielders in the organization.

Tommy Pham has not produced as expected since 2019. Don’t expect this trend to continue. While he will be 34 years old for the 2022 season, his peripheral stats have stayed impressive. He has just gotten unlucky. Excluding his .253 BABIP in 125 plate appearances in 2020, Tommy Pham had a career-low full-season BABIP of .280 in 2021. He showcased power to all fields, but his expected slugging, which ranked in the top half of the league, was significantly higher than his true 2021 slugging percentage (.432 and .383, respectively). Pham’s 2021 spray chart reveals that many would-be home runs that fell just short of crossing over the wall, and his average exit velocity and barrel and hard-hit rate are all above average. His plate discipline is still elite, with walk and chase rates in the top 5% of MLB. With Grossman and Pham in the same lineup, pitchers would need to have complete control of the strike zone to avoid shelling out free passes. However, Pham has become a worse defensive outfielder than Grossman, as both of them enter an athletic decline. This could present a problem in the deep outfield of Comerica Park. Nonetheless, Fangraphs projects him to improve from 1.5 WAR to 2.2 WAR in 2022. 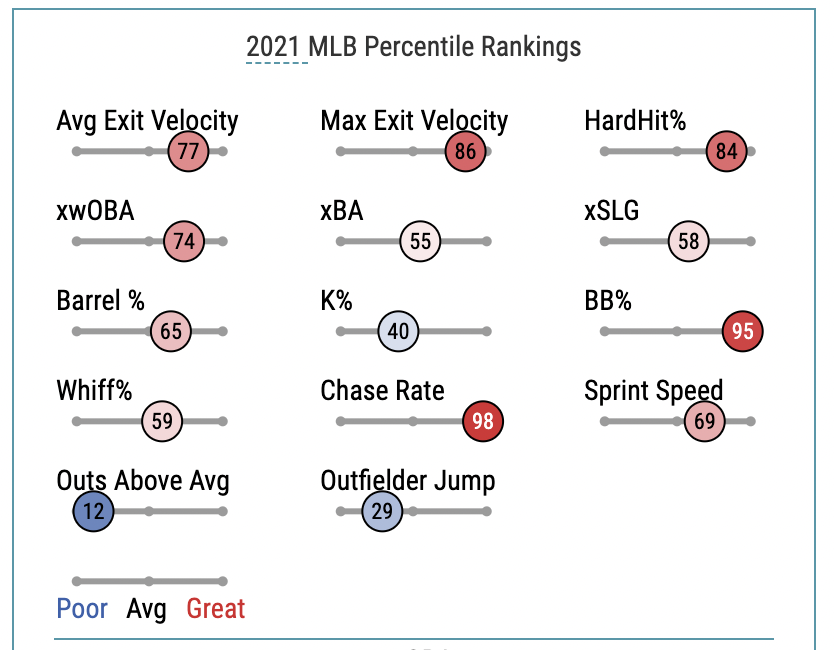 Jackie Bradley Jr. is an enticing target here, but who knows what his contract demands will be after his awful 2021 season. Bradley Jr. fits what the Tigers need, but he has turned into a confounding player and one that a team on the rise may want to stay away from. Derek Hill deserves his chance to be a full-time player after an abbreviated, albeit quite serviceable, 2021. Hill had a 96 OPS+ and played good defense in center. Akil Baddoo also played over 500 innings in center, but had negative DRS. His offseason growth at the position should be a priority for the Tigers’ development team, especially if the Tigers add a corner outfielder and bump Baddoo out of a regular position. Without many realistic free agent options out there, the Tigers should sign a quality defensive veteran to back up Hill and Baddoo.

Signing the switch-hitting Billy Hamilton would solely be for depth. Hamilton’s career OBP is below .300, but he is a defensive wizard. He has played sparingly in the majors since 2019, but his Statcast Outs Above Average remain above average on a per-inning basis. No one in Toledo is ready to take the job in center field if Derek Hill gets hurt, especially in a cavernous outfield like Comerica Park. Hamilton would be the contingency plan. His handedness would also allow for a defensive platoon in the event that Akil Baddoo is still a defensive liability in center as he was in 2021. Hamilton is a speedy player who consistently records above-average defensive seasons in center field. He’s a valuable depth piece that can potentially be had for a minor league deal.

Michael Conforto presents value for the Tigers, both in the short and long term. While they may only offer a sizable one-year deal, as he’s coming off his worst season since his rookie year, he’ll only be 29 entering 2022 and a multi-year deal would fit with the timeline of this team. Along with signing one of the top shortstops on the market, Conforto would be another impactful player to add to a Detroit lineup that has not exactly been a murderer’s row. In 2022, Conforto’s fit is clear. He would be an everyday starter in right field, sliding the switch-hitting Robbie Grossman to left. Grossman would split time there with Akil Baddoo to maximize platoon splits, while Baddoo would also get some time in center. Robbie Grossman is a free agent after the 2022 season, so a longer deal for Conforto would not crowd the outfield. He may accept the Mets’ qualifying offer, betting on himself to bounce back and receive a better deal in the 2022 offseason, but the Tigers have the space to pay him around $20 million in average annual value.

Michael Conforto is a player who has the ability to play at an MVP level. He is guaranteed to hit for power, walk, and play good defense. He should bounce back after an injury-riddled 2021. While it’s surprising that Conforto’s average exit velocity and hard-hit percentage in 2021 were both in the bottom 40 percent of the league, they are actually both extremely close to his career averages. He underperformed his expected batting stats by a good margin. Part of that can be attributed to his season-long hamstring issues, but his sweet spot and barrel percentages fell below his career averages. After a 2020 season in which it looked like Conforto had solved some issues with hitting offspeed pitches, he reverted to a pure fastball hitter this year. This shouldn’t worry potential suitors for Conforto, though. While he had troubles with injuries and off-speed pitches, he set a career-low strikeout rate and has maintained a walk rate above ten percent since his rookie season. He was also unlucky, suffering from a near career-low BABIP of .276 in 2021. Fangraphs projects Conforto’s WRC+ to rise from 106 to 120 in 2022. The Tigers staff has proven they can extract the best version of an underperforming or obscure player, and they should be able to do it with Conforto with some retooling. All signs point to Conforto returning to his status as a star player that impacts both sides of the game. 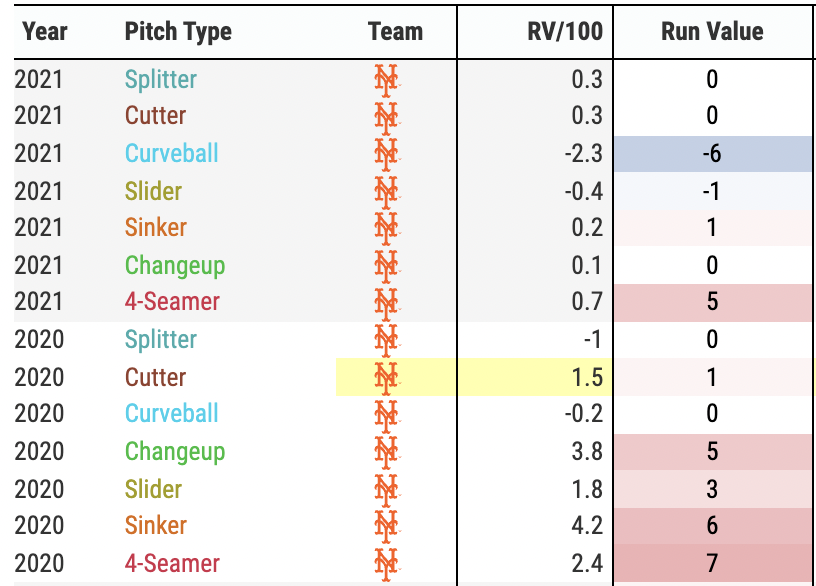