It was a successful first season. I would hardly call finishing 17th out of 18 teams an unexpected result, but the team is making progress in the right direction, which is more than can be said for the club that I inherited.

Here’s a side-by-side of the team I was handed at the beginning of the season versus the team that I have now: 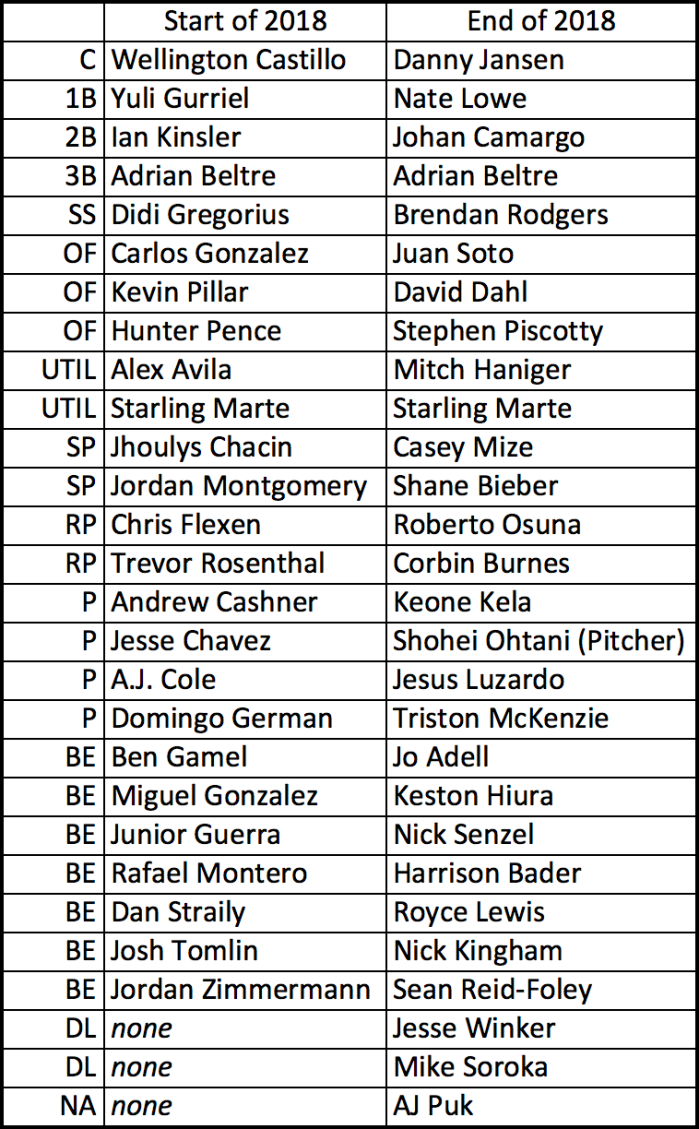 Night and day in my opinion.

At the beginning of the year, I sorted players two different ways: by age and by talent level. If I go through the same exercise now, it’s crystal clear that the team has been upgraded in nearly every way possible.

Here’s the sort by age:

Now, the more important evaluation: the talent. Young players are only valuable if they are actually producing or have a decent chance of producing in the future; you can grab as many under-25 guys as you want but if they aren’t going to produce for you then that’s just wasted roster space.

Here’s the current roster, broken down into the categories that I used to initially evaluate the team:

I think the biggest notable change here is that most of the players are either franchise players or starters. It’s difficult to do this assessment right now, especially considering that 21 of 30 players on the roster either just finished their rookie season or are still in the minor leagues. The only player on the squad that I would call a surefire franchise player is Juan Soto, and that’s because he’s still a teenager and simply destroyed baseballs this year. He’s going to be doing that for a long time, hopefully. The case can be made that Osuna is a franchise player because he is a top-five closer in the game when he is on the field. The other guys are more tricky.

Most of the guys on the team, regardless of what category they’re in, are more valuable to my squad than to other squads for the simple reason that I do not care right now about wins and losses, and it’s hard to win matchups with players that aren’t accruing statistics in the majors. So even though some of the people I put into the franchise player category might not be franchise players right now, I think they have a solid chance of developing into franchise players in the not-so-distant future.

Brendan Rodgers, Jo Adell, and Casey Mize are pretty close to can’t-miss prospects (which obviously don’t exist, but the trio of players have decent floors and impressive ceilings). Ohtani is a really good pitcher when he’s healthy which, unfortunately, won’t be until the beginning of the 2020 season at the earliest.

I’m not going to go through player-by-player and give my take on all of them because that’s not the point of this series. I will say, though, that the best way to improve a team is through free agency. When you look at how I have acquired the players I have on my roster, most of them have come through free agency. Twenty-one of my thirty players were acquired via free agency and only two players from my original roster remain on the team today (Beltre and Marte).

With the first season coming to a close, I think it’s an appropriate time to take a step back and re-assess the progress we have made and make a concrete plan for the future.

Firstly, there are players on this roster that are actually assets in a dynasty league. That’s encouraging.

Secondly, there is a clear timetable for this team. By the middle of 2020, most of the prospects on this team will be in the major leagues. That’s our timeline: 2020 and beyond. This means that Starling Marte is likely going to be traded this upcoming season, because he is on the wrong side of thirty and will be two years older in 2020, not auspicious for a player who relies on speed to create value.

Delving deeper into trades, I think it’s appropriate to begin consolidating talent here. Obviously, it’s difficult to do so when most of the assets on this team are prospects, but it’s at least worth a try. There is really only one absolute stud on this roster: Juan Soto. There are a lot of above-average players, however, so looking to deal at least a few of those guys is worth it. Plus, bench bats are a lot less valuable than bench arms, especially in points leagues. Remember at the beginning of the series how I said not to worry about position—just acquire the best players possible? I still think that holds true, but there is an outfielder surplus on my roster (I have six good outfielders in an 18-team league with Adell waiting in the wings and three outfield spots. Not all those guys are going to play). This is where it makes sense to look at positionality on the roster and make some changes. It doesn’t mean that I should be taking a loss on my players just to convert pitchers into hitters because my timeline is still far away, but if a good offer for hitting comes around and it involves pitchers, that may be an offer worth pursuing.

Overall, the team is certainly headed in the right direction. The next phase of the rebuild is the hardest part: the waiting game. There is an average-or-better player or prospect at every position on this team, so there is no reason to make any drastic moves. It’s difficult to just let the roster sit and age so that the prospects can come up to the bigs, but it looks as though that is the next course of action here.

Good thing the season’s over and I don’t have to worry about this roster until March. Until then, I just have to wait. And then after that, I’ll have to wait a little more. Still, though, I can see the light at the end of the tunnel.