M-SABR Co-Presidents Max and Zane tackle the 2018 AL All-Star roster, disregarding all staff input as per usual. Stats as of July 7, 2018.

Max: Any long-time M-SABR readers and members know just how strongly I feel about making All-Star teams, even if they are usually of the Sabermetric variety. Today, though, with the Midsummer Classic at Nationals Park rapidly approaching, I thought we might take a crack at the traditional format while still maintaining our trademark sabermetric focus. You ready, Zane?

Zane: Ready to find a Royal, White Sox, and Blue Jay to round out an otherwise pretty chalk AL roster? Absolutely. Let’s get this party started!

Zane: Wilson Ramos practically wins the AL catcher spot by default. There are no good catchers. He beat out a DH (Evan Gattis) and two backup catchers (Max Stassi and Luke Maile) for the nod, and that really says it all. He does have a dozen home runs on the year and has been very impressive defensively, but honestly, any of the NL’s three all-star catchers (Max: Whoa, spoiler alert!) would have gotten the nod should they have played in the AL.

Max: Could not agree more. Ramos is the obvious choice to start, and until he starts wearing batting gloves, Evan Gattis is just as easy of a pick as is back up. His 18 home runs and 61 RBI lead all catchers, and his 124 wRC+ even helps El Oso Blanco’s sabermetric case.

Max: Coming into the season, people were so high on Matt Olson as the next young MLB and fantasy superstar that seeing him lead all AL first basemen in fWAR by the All-Star break would have channeled fantasies of a young Jim Thome. Yet following a 2017 season in which he put up an impressive 162 wRC+ and 24 home runs in just 59 games, the 24-year old has failed to meet lofty expectations. His HR/FB rate has plummeted from an unsustainable 41.4% to a solid-yet-unspectacular 18.8%, and his average is hovering around .240. Yet Oakland still has a shot at a Wild Card and given that the team is partially carried by its bright, young corner infield bats, that statistical case for Olson is a strong one. So Zane, do we have a strong back up?

Zane: Nope, but Jose Abreu plays for the White Sox. No stats needed.

Zane: Altuve is an easy pick for second base. His power numbers and his base-stealing numbers may be down slightly from 2017, but Altuve is once again posting an on-base percentage over .400. He is by far the best second baseman in the major leagues and has been for years. No debate here.

Max: Unlike first base, the All-Star roster rules do in fact hurt a deserving candidate at second. Jed Lowrie has simply been awesome, with his 3.1 fWAR placing him in the top 20 in all of Major League Baseball. Lowrie even leads the great Altuve himself in HR, RBI, and SLG. Yet rules are rules, and Whit Merrifield is a Royal. So, no debate here. Sorry, Jed!

Max: Welcome to the brief, yet critical Cleveland infield section of our article. The brilliance of Jose Ramirez and Francisco Lindor cannot be overstated but the fact that Ramirez is on pace for the highest single-season fWAR by any third basemen in MLB history does a nice job of keeping this argument short.

Zane: Exactly. Meanwhile, Alex Bregman has been fantastic for the Astros this year. He is tied with Andrelton Simmons (another spoiler alert) for the 13th-best fWAR in all of baseball with his 3.7 mark this season and he has posted a very impressive 150 wRC+. The best part? He’s only 24.

Max: But what about your boy Matt Chapman?

Zane: Well, I really wanted to put Matt Chapman on the team, and he was the closest of any of our honorable mentions to miss a team, but his recent DL stint likely kept him off. His defensive numbers are absolutely incredible, especially for a third baseman, and he has hit for decent power and walks at an 11% rate. Don’t worry, though, A’s fans: he’s a franchise fixture and should make the team in the near future.

Zane: Francisco Lindor is the truest five-tool player in all of baseball. This year, he is hitting for average (.300), power (23 HR), fielding incredibly well (10.2 runs above average by Fangraphs’ defensive metric), making an impact on the basepaths (12 stolen bases), and showing off a rocket arm at shortstop. His 5.2 fWAR in 85 games is nearly identical to his fantastic 5.9 fWAR in 159 games last season. Lindor is a monster and is the best player at a stacked position. Speaking of stacked position, who is making the bench for the AL, Max?

Max: The bench features two absolute studs that both happen to be best known for their glove. Yet while Andrelton Simmons has continued to dominate defensively as he finds his bat after years of Gold Glove only production (his 4.7% strikeout rate is simply ludicrous), Manny Machado might be due for reassessment. Fangraphs still lists our only All-Star Oriole as a third baseman and ironically that might not be by accident. After years of exceptional defense at the hot corner, Machado ranks last among qualified shortstops with a -7.8 UZR. Luckily his powerful bat is enough to earn his spot on this team after a rough 2017. 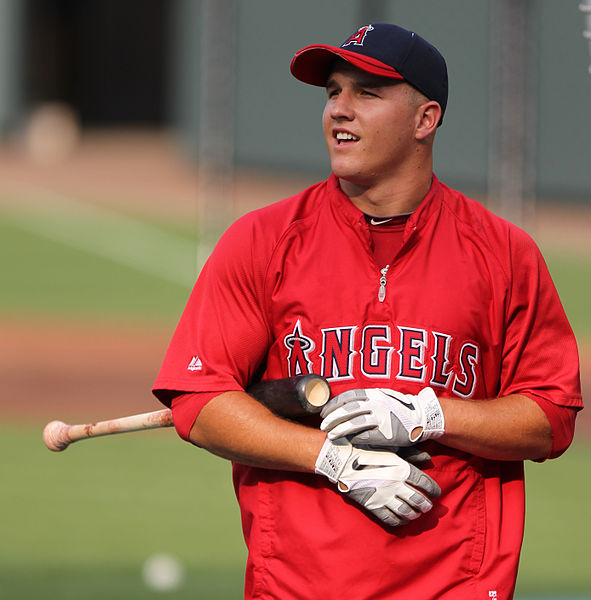 Max: Well this took about 0.4 seconds to pick. Mike Trout is somehow having a career year with a personal best 190 wRC+ and an 11.2 fWAR pace. Mookie Betts is somehow beating both of those with a 193 wRC+ and a hypothetical per-game 12.2 fWAR pace, though the missed games will sadly prevent him from reaching that historic WAR total. Judge continues to rake, and while he won’t reach his 2017 heights, 24 home runs, a .566 slugging percentage, and a 160 wRC+ are nothing to scoff at. Zane, who rounds out the bench? You know I want to see Benintendi in there.

Zane: The bench for this one became pretty complicated, Max. We left off three amazing players due to the sheer depth of the position in the American League: Giancarlo Stanton, Aaron Hicks, and Mitch Haniger all narrowly missed (though Haniger only missed due our incoming hot take). The guys who did make it are nothing to scoff at, however. Eddie Rosario is having a monster breakout year for the Twins, and while I don’t think he will continue this production in future seasons, that does not change what he has already done in 2018. I mean, really, a .380 wOBA came out of nowhere, but the guy loves extra-base hits. Andrew Benintendi has been a stud, too. He may not have quite the power of Rosario (he has a .365 wOBA), but he has 16 stolen bases through 85 games. I’m sure the Red Sox are happy that he will most likely reach a 20/20 season by mid-to-late-August. Our final bench outfielder is Nicholas Castellanos. He only made the team because the Tigers need a representative, but he has been very impressive this season. He was primarily hitting for average early in the season, but has had a power surge recently and now sits at a .302 average with 14 home runs. His 2.1 fWAR is pulled down by his poor fielding, but Castellanos has come through for the Tigers all year and deserves a nod.

Zane: I wish the Tigers had given J.D. Martinez a $125 million contract, just because I miss the sheer amount of home runs “Just Dingers” hits. He has an incredible 3.4 fWAR this season despite very poor defensive numbers, and has 27 home runs through 84 games. His .392 OBP is absurd, and his .434 wOBA is even more absurd. He’s not the only incredibly impressive American League DH though, is he, Max?

Max: Nice segue Zane, but before I introduce an entirely new and unheard of All-Star position, let me start with our more traditional DH: Shin-Soo Choo. The richest contract to never make an All-Star team is about to get his time, and his 146 wRC+ and 2.9 fWAR make him very deserving. But now onto the exciting stuff.

Max: This All-Star is truly a star at all things, and leaving him off our All-Star roster would not only have been bad for Zane and my brand but for baseball—nay, the world—as a whole. His iffy elbow might keep Shohei and his filthy, 11.13 K/9 pitch arsenal off the mound, but let us not let that keep his mighty, 6 HR, 41.4 Hard% and 140 wRC+ from the plate. Here’s to your first of many, Shohei!

Zane: The American League has some very impressive starters this year. That said, Justin Verlander should start the All-Star Game. Ultimately, he probably won’t because he’s pitching the day before the All-Star Break, but he deserves the nod after his incredible 2.15 ERA first-half. He’s striking out guys at a higher rate than he ever has in his career (11.03 strikeouts per nine) and had an ERA in the low 1’s for much of the first half. Sure, Trevor Bauer and Luis Severino have a higher fWAR at this point in the season (4.6 and 4.4 respectively), but JV has been the American League’s—and arguably all of baseball’s—most dominant pitcher thus far in 2018. What about the other guys, Max?

Max: The All-Star game no longer decides home field advantage in the World Series, but I think the Big-Game JV moniker still applies here so I second your starter pick. Bauer and Severino are the closest competitors for sure, but the pitching staff here as a whole has been incredible. Gerrit Cole seemingly did not give up a hit in April, James Paxton has literally not given up a hit in Canada this year, and Corey Kluber and Chris Sale have long made a living out of giving up hardly any hits. Blake Snell has been one of the best stories in baseball in 2018 as he has broken out to the tune of a 2.24 ERA, 10.19 K/9 and somehow 11 wins on a mediocre Rays team. All three relievers have been absolutely dominant, with Diaz, Treinen, and Chapman placing 2nd, 3rd and 4th among relievers in fWAR, trailing only the superhuman Josh Hader. Treinen’s 1.82 FIP being the worst amongst the three tells you everything you need to know, yet his 0.84 ERA actually leads the group. Simply put this AL pitching staff is an embarrassment of riches. Oh and then there’s J.A. Happ and his 4.03 ERA. He’s our mandatory Blue Jay.