Home › Articles › Could Barry Bonds save the ’62 Mets? An OOTP Simulation

Could Barry Bonds save the ’62 Mets? An OOTP Simulation

Could one player lead the worst team of all time to glory?

When we talk about the worst baseball teams of all time, the 1962 Mets are the team that comes up far more than any other. An expansion team led by the great Casey Stengel, the Mets lost a record 120 games, and looked bad doing it. First baseman “Marvelous” Marv Throneberry once hit a triple, but was called out after missing both first and second base. That’s just one of dozens of anecdotes about how truly awful this team was. But is there anyone who could have saved this trainwreck of a season? What about Barry Bonds in his prime?

The short answer is no. At his peak, Bonds was worth 12.7 fWAR. This was in a 2002 season in which he reached base at a .582 clip and hit 46 home runs. If he were to replace a 0 WAR player, the Mets would still theoretically only win 53 games. Clearly, the impact of one player on this team is minuscule at best. But what if we could create a hypothetical 50 WAR player: a Barry Bonds on steroids (OK, maybe not the best metaphor). With a little bit of luck, this player could overcome the weakness of his 24 teammates and launch the Mets right into the pennant race. No such player exists in real life, but we can try to create one in OOTP. Meet the new and improved Barry Bonds!

Bonds is maxed out in just about every single way. He can draw walks, hit for power, play great defense, and steal bases at will. I decided not to make him a great bunter, because I don’t want him bunting. Finally, I placed Bonds at shortstop, where his great defense can make a huge impact. This is the best player the game would let me create. Let’s see what the preseason predictions look like.

Despite our terrible pitching, OOTP likes our chances. They predict us to score 100 more runs than any other team. The only way to find out is to play the season. Let’s go month by month.

After a month, the Mets are 13-5, a game behind the Giants for first place in the NL. Here are Bonds’ stats at this point in the season.

The 4 home runs is a disappointment, but nothing else is. Bonds hit .517 the first month of the season; none of his teammates cracked .300. His 18 stolen bases are more than any other team.  Also of note, he is on pace for 27.5 WAR. It’s not quite 50, but I guess it’ll do. He is the only qualified hitter not to strike out this season, and his 23 walks are 6 more than any other player.

Things came down to Earth a little bit for the Mets. They went 14-18 in the month of June, and their team ERA dropped from 3rd to 8th in the NL. They now sit in 3rd place, 9 games behind the Giants. Bonds’ OPS of 1.333 was his lowest of any month this season. He has still struck out only 6 times this season, 4 fewer than any other player.

Bonds watches helplessly as his team collapses around him. After an 11-18 month, the Mets are now in 5th place. Their pitching is last in the NL in just about every category. The hitting around Bonds has been acceptable. Marv Throneberry has 26 home runs. Frank “Not that Frank Thomas” Thomas is slugging .460. And of course Bonds is having a great year. He stole his 100th base at the end of the month, and he is first in every single batting statistic except for RBIs. This is partially due to the fact that his teammates can’t get on base, but more because Bonds has walked 131 times. He is on pace to walk 195 times, which astoundingly would be only the third highest of his career.

For the first time all year, Bonds’ batting average drops below .500: to a measly .495. He has been worth 24.1 WAR, over twice as many as the next highest player. Another standout part of his game is his defense. His zone rating of 34.1 is three times better than any other shortstop in the league. Yet, this season still feels like a disappointment. We set out hoping Bonds could single-handedly win the Mets the pennant, and that just hasn’t happened. As of now, they sit at 74-65, a mile out of first place. He simply has not been able to overcome his atrocious teammates. Don Zimmer has been particularly awful, playing nearly every day despite his 56 OPS+ and -0.7 WAR.

It was a cool finish to the season for Bonds and the Mets. They finished 82-80, a significant improvement from 40-120, but disappointing nonetheless. Here are the team’s final statistics: 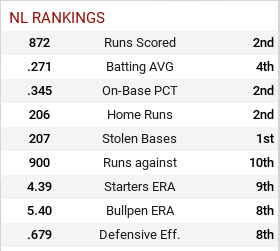 These are all out of 10 teams. This shouldn’t be surprising. The Mets had horrible pitching and one great slugger. They did score 255 more runs than in real life, which can be attributed mostly to Bonds, but also to luck. While the Mets did improve by 42 wins, I still can’t help but feel this season was a disappointment. The best player the game would let me create failed to lead his team to the pennant. I guess there truly is no saving the ’62 Mets.

Oh, one more thing. The Twins blew a 3 games to 0 lead in the World Series against the Giants. Here’s some proof. 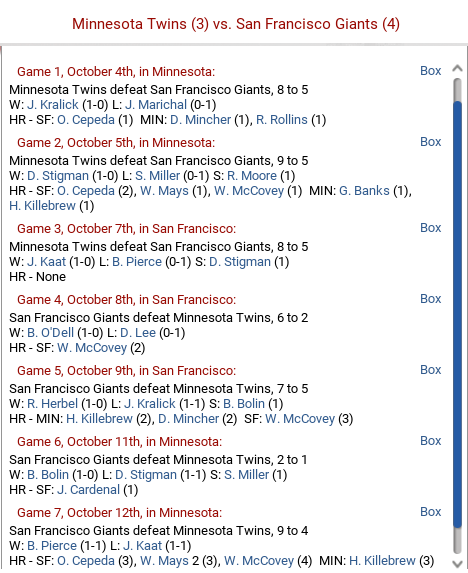 This doesn’t have anything to do with Barry Bonds, but I thought it was an entertaining way to end the season.  In a season where I set out to make the impossible happen, it kind of did, just not in the way I expected. That’s good enough for me.