Home › Analysis › Barrels, Normative Analysis, and the Beauty of Statcast

Barrels, Normative Analysis, and the Beauty of Statcast

Statcast—MLB’s player-tracking, ball-tracking, everything-tracking tool—has improved in accuracy and volume each year since its inception. The data it provides is uniquely valuable. Thus, we need to ask an important question: How can we put this data to good use?

My purpose in writing this article is to create a set of statistics that measures how well a player should have performed based on Statcast data. I accomplished this with the creation of three new measurements: eSLG, eISO, and eHR/G. We’ll go into these terms in-depth later, but for now, it’s important to know what my original intent was.

Each year, it happens that players who performed brilliantly the season before underachieve the next year. Then there’s another set of players who post career-high numbers just a summer after struggling through statistically-depressing seasons. Regression, be it positive or negative, is a staple of Major League Baseball. So how can we predict which players are most likely to succumb to regression? The answer lies in Statcast. Using Statcast data, I developed expected results for 407 eligible batters from 2015 and 2016. This is where eSLG, eISO, and eHR/G come from.

I examined Statcast results for batters with at least 150 batted ball events (balls put in play). I combined sabermetrics and Statcast data in a spreadsheet of 407 hitters from the 2015 and 2016 seasons, then mixed and matched different variables in order to evaluate positive or negative correlations. I wanted to see which Statcast variables correlated highest with basic and advanced statistics; then, I could start with normative analysis and expected output. I used R to perform linear regressions and other modelings like scatterplots with least-squares lines to show trends. Some of the most interesting discoveries came from Barrels, which was recently unveiled by Major League Baseball.

MLB’s newest Statcast treasure is called Barrels. It measures a player’s ability to put the barrel of the bat on the ball and generate good contact. Per MLB.com, “A barrel is defined as a well-struck ball where the combination of exit velocity and launch angle generally leads to a minimum .500 batting average and 1.500 slugging percentage.”

The “barrel zone” is shown in the graphic above; it starts at an exit velocity of 98 mph with a launch angle between 26 and 30 degrees and then extends outwards.

Mixing and Matching: Statcast and Sabermetrics

As some preliminary research, I ran linear regression analyses on Statcast and advanced analytics variables, as displayed in Table 1 below. Their R-squared values—which show correlation, with a higher value meaning the two variables are more closely associated—are listed.

Barrels: Relationships with Other Statistics

The first thing we can note is that Barrels Per Plate Appearance, known henceforth as B/PA, has high correlations with three statistics: Isolated Power (ISO), Home Runs Per Game (HR/G), and Slugging Percentage (SLG). Graph 1 shows the B/PA-SLG relationship. 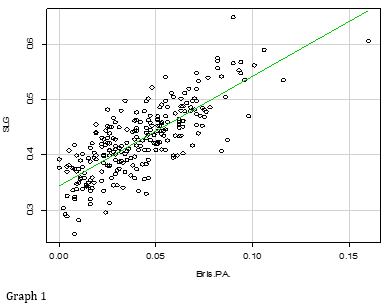 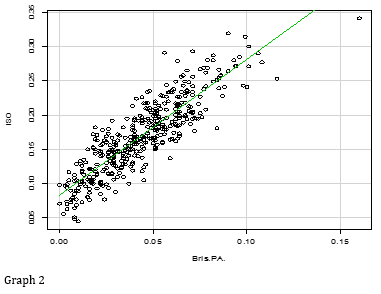 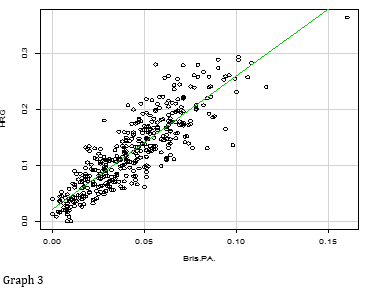 Slugging Percentage represents the total number of bases that a player records per at-bat. It attempts to correct the flaws that come with Batting Average—that not all hits are created equal. Thus, when calculating SLG, extra weight is given to doubles, triples, and home runs. ISO does something similar but ultimately subtracts batting average from slugging average. For homers, I had to use HR/G rather than HR to account for the fact that players who played more games would dominate the home run projections simply because they had more opportunities. Measuring on a per game basis averages out the totals and highlights which players hit homers at higher rates.

So why do ISO, SLG, and HR/G have stronger positive relationships with Barrels in comparison to other stats? Well, how do those three measurements differ from other statistics like On-Base Percentage (OBP) and Weighted On-Base Average (wOBA), for example? Essentially, ISO, SLG, and HR don’t deal with walks and hit-by-pitches—they rely on the ball being hit. Barrels can only occur when the ball is hit in play. Parts of OBP and wOBA—a more advanced stat that estimates the value of each walk, hit, or hit-by-pitch and then churns out a value—trust heavily on walks and hit-by-pitches, which clouds the correlations between B/PA and these statistics. (For those who might not fully understand wOBA, it’s helpful to think of SLG as a less sophisticated hits-only version of wOBA.)

It’s only logical that hitting more balls on the barrel of the bat will lead to more hard-hit balls, which will result in more hits, a higher slugging average, and more isolated power and home runs.

I wanted to see which players in 2015 got “unlucky,” meaning they hit a high percentage of balls on the barrel of the bat and at a good launch angle, but weren’t rewarded with high slugging percentages, high isolated power numbers, or an appropriate amount of home runs. In the next sections, I’ll run through how we can establish who was “lucky” and who was not. Using linear regression models, I found the equation of the least-squares regression line for each relationship (and each scatterplot) from above. Using these equations, I then determined what every qualified player should have recorded in 2015 for each statistic being measured. I named this statistic by putting an “e” in front of the y-variable stat. For example, the expected Slugging Percentage (eSLG) for Jon Jay in 2015 was 0.365. His actual slugging percentage (aSLG) was 0.257. I’ll go into more detail for each of the three statistics below.

To find expected slugging percentage (eSLG) based on B/PA, I first ran the linear regression analysis, then used R numerical summaries to determine the equation of the least squares regression line. The equation was y = 2.0553X + 0.349.

Plugging in B/PA as the x-variable, I found eSLG for each qualifying player. Finally, I subtracted eSLG from aSLG to demonstrate whether a player slugged above or below what he should have based on how often he put the barrel of the bat on the ball.

As a side note, I believe other analysts have attempted to do something similar with Exit Velocity and even Launch Angle before Statcast released Barrels. However, Exit Velocity doesn’t correlate nearly as strongly with slugging percentage and other statistics. Thus, I think we can safely use Barrels now that it has been released and is statistically significant.

Here are the “unluckiest” players of 2015, based on what they should have slugged:

Notice that some of the “luckiest” players are some the game’s best hitters. Bryce Harper had one of the greatest seasons ever in 2015—can we really contribute any of this to luck?

Research has proven that MLB talent is, in general, normally distributed, so it would make sense that the players who overperformed or underperformed their expected slugging averages based on Barrels would regress to the mean.

I looked at the slugging percentages of each of these players in 2016, to see if they did in fact regress.

As was expected, most of the players in the tables regressed to the mean, or at least moved a little closer to the average. Of the “unlucky” players, notice that of the players who remained in MLB in 2016, only Plawecki, Iannetta, and Smoak didn’t see their slugging percentages rise. And Plawecki has actually played most of 2016 in the minor leagues, where he’s slugged an impressive 0.484.

The “lucky” players mostly showed regression, too. Bryce Harper is the most apparent, but every other player besides Dustin Pedroia also decreased in SLG% in 2016. It should be noted AJ Pollock and Michael Brantley are both recovering from injuries, and though their slugging averages have fallen, they’ve each played in just a handful of games.

Determining Expected Isolated Power (eISO) for a player is similar to how we found eSLG. The equation for eISO was y = 1.982412X + 0.083254. Simply plug in the player’s B/PA percentage and the result will be what his ISO should have been based on how often he hit the ball on the sweet spot of the bat.

Here are the “unluckiest” players of 2015, based on what they should have posted in terms of ISO:

Now let’s do the same thing we did with Slugging Percentage—that is, take a look at how these players have fared in 2016. Did regression occur with ISO as it did (for the most part) with SLG?

The results are similar to those we obtained from running the numbers to get Expected Slugging Percentage. Players who overperformed in 2015—those who likely benefitted from luck—saw their ISOs decrease by an average of 0.040 in 2016. Those who underperformed based on their B/PA had their ISOs increase by 0.021 in 2016. So it’s clear that some players just have bad luck some years—they hit the ball on the sweet spot of the bat more often than most, but aren’t rewarded with base hits.

The final statistic we’ll develop is Expected Home Runs Per Game, or eHR/G. Once again, we’re focusing on Home Runs as one of the three main stats because it holds such a strong correlation with Barrels. The process is pretty much the same as it was for finding eSLG and eISO, so I won’t go into great detail.

The equation for eHR/G was y = 339.348X + 2.1723. We make B/PA percentage the input and eHR/G the output. If a player hit more home runs than he should have based on the percentage of balls he hit on the barrel, we call him “lucky,” at least during the 2015 season. If he hit fewer homers per game than would be expected, we call him “unlucky.”

You know the drill—we will now take a look at homer per game rate for 2016, to see if regression to the mean occurred for the players in both of these tables.

Here are the “unlucky” ones:

And the “lucky” ones:

Reviewing the tables above, it looks at though the data isn’t quite as telling for players who supposedly underperformed in home run rate in 2015. But for the overachievers, it’s a whole different story. The average “lucky” player in 2015 saw his HR/G rate fall by 0.06 bombs per contest. That’s almost 10 home runs over the stretch of a 162-game season. Using this model, we probably could have predicted that Mark Teixeira, who somehow belted 31 homers while only averaging 0.07 barrels for every plate appearance, would take a big step backward in power numbers in 2016. Analysis like this can be invaluable to a team deciding which players they want to go after in the trade market and who they might want to forget about when signing free agents.

How can we use the three expected statistics? They shouldn’t be the most decisive factor when a ball club makes choices regarding acquiring players or letting them go. But the concept is similar to Pythagorean Wins, which tell us how many wins a team should have given their run differentials. For example, the Texas Rangers have the best record in the AL in 2016, but Pythagorean Wins says they should have 13 fewer wins because they don’t outscore teams by all that much. This type of normative analysis can be advantageous when evaluating players without bias.

Using my model, we can plug in a player’s Barrels/PA to find what his slugging percentage, isolated power, and home run totals should be. This isn’t always telling—many factors decide the fate of every batted ball—but if the difference between eSLG and aSLG is abnormally large, if eISO is much lower than aISO, if eHR/G is twice as high as aHR/G, regression might be coming up in the near future.