The Revelation of Rowdy Tellez

The Milwaukee Brewers have had a different player take the majority of plate appearances at first base in each season since their recent playoff streak began in 2018. Lacking consistency at a position that requires dominant hitting to be valuable, the Brewers have still been a regular playoff team without an answer at that marquee position. Jesus Aguilar and Eric Thames were good contributors in 2018 and 2019, but the position has been a liability since 2020.

Jedd Gyorko and Travis Shaw served together in a platoon in the shortened season. While Gyorko was very effective against left-handed pitching, neither player could hit right-handed pitching at close to an average level. Milwaukee’s first basemen played like light-hitting shortstops against 75% of MLB pitchers.. It would be no surprise, then, that Milwaukee lost in the first round in 2020, which they have done every year since 2019 after making the NLCS in 2018.

Gyorko’s (Above) and Shaw’s (Below) Platoon Stats

2021 was no different for the Brewers at first base, especially in the first half of the season. Keston Hiura and Daniel Vogelbach were the initial pairing, but the two players struggled to be league average hitters. As a result, and with the team still in the playoff hunt, Milwaukee made a trade on July 6th, 2021 that bore fruit nearly immediately. Squeezed out of Toronto’s heavy-hitting lineup, left-handed first base/DH Rowdy Tellez had yet to accrue enough major league plate appearances to truly realize his potential. That would change once he was traded to the Brewers.

In the month after the trade, Tellez had a 1.105 OPS across 51 plate appearances. However, once given a regular role, the production eventually slowed to a trickle. Tellez had a .707 OPS in August, and then a .600 OPS in September where Tellez did not either walk or hit a home run. Tellez’s end to 2021 proved he was not yet a polished product, especially not for a contending team like Milwaukee. That’s why it’s puzzling that the Brewers didn’t bring in a lefty bat to contend with Tellez in the 2022 Offseason, but the gamble seems to have paid off.

So far in 2022, Rowdy has been the Brewers’ best full-time hitter with a 130 OPS+. We’re now through about 25% of the season, so it’s too late to call this a fluke. Milwaukee needs his production, too. We know about the lethality of their staff, but their lineup has decidedly not been a murderers’ row, despite their NL Central-leading record. Wong, Yelich, Cain, and McCutchen have produced well below expectations, and Renfroe and Adames are currently hurt. Tellez and catcher Omar Narvaez will seek to buoy the team during this rough patch. 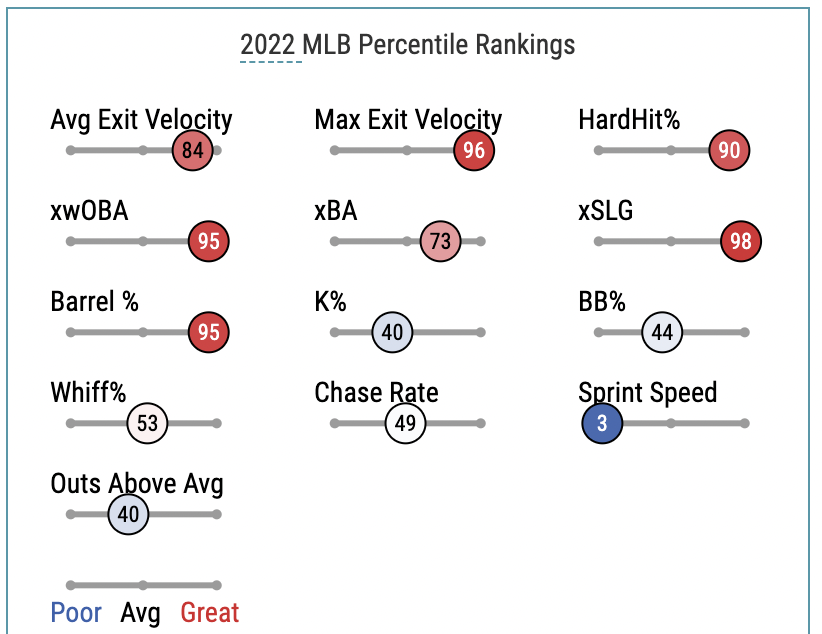 The underlying numbers are very kind to Tellez, so this production should be here to stay. Per Savant, Tellez’s ability to crush the ball is unmatched in MLB this season, and his expected numbers say that the results produced should be even better. He has an absurd SLG/xSLG disparity of almost 150 points with his xSLG being .659! In this season of the deadened ball, Tellez has already hit 10 home runs, which puts him on track to hit about 35 this season. He is the slugger at first base the Brewers have needed, but there are areas of concern with room for growth.

Tellez has earned nearly all of his success on non-offspeed pitches. Not being able to hit curveballs and changeups has been a theme for Tellez throughout his career, and it’s the primary culprit for his plate discipline numbers being at or below average. It’s strange because he has been able to hit sliders much better this season than any other, but the curves and changes still get to him. The most frequent pitch against him is something down and away, and he continues to whiff against it.

Rowdy has put together an All-Star caliber season so far in 2022, but to continue his success, and to possibly build upon it, he will need to learn to time offspeed pitches better, and stop swinging and missing at pitches down and away. He is barreling the ball at 4% more than his career high he set last season, but now he just needs to make the improvements that come from holding off from swinging. Unlocking an extra level of plate discipline could be what takes his game even further than the massive improvements he has made since arriving in Milwaukee.