Home › Articles › On Eric Haase’s Future With The Detroit Tigers

On Eric Haase’s Future With The Detroit Tigers

*All statistics used are through 9/16

Born in Westland, Michigan, about a thirty minute drive from downtown, Eric Haase grew up a fan of the Detroit Tigers. He has since become a fan favorite there. His first plate appearances this season coincided with the Tigers’ emergence from an awful 9-24 start. After a modest May, Haase slashed .450/.522/1.400 with six home runs in six games from June 1st to June 8th, with four of those round-trippers coming from two two-homer games. It was hard to think before June that the Tigers would be any better than the past five years of awful baseball.

Yet, with Haase’s play, Akil Baddoo shaking off his late-April to mid-May slump, and a stellar pitching staff, fans in Detroit started to believe the Boys of Summer were finally back. With two weeks to go in the season, Haase is second on the team with 21 home runs and fourth in OPS+ with 111. We have seen what he can do in almost a full season and we have seen how he can galvanize an organization and a fanbase. However, some doubts remain about his future, mainly his strikeout and walk rate, his defense, and the catchers present within the Tigers organization and the possible replacements that could come from outside of it.

Is Haase an asset worth keeping around for the next couple of seasons, or is his sentimental value to the city worth more than his value as a player? Let’s get into some peripherals.

The main reason why a team would keep Eric Haase around is his offense. By WRC+, Eric Haase is four percent above the league average as a hitter. His hard hit percentage and barrel rate are both in the top fifth of the league, according to Baseball Savant. There is no doubt he has been offensively productive this year for the Tigers, and as a catcher it is extremely valuable even in the face of his defensive shortcomings. However, there are reasons to doubt his offensive sustainability considering his wOBA has fallen considerably since the All-Star break.

Haase is in the bottom five percent of major leaguers with a 30.6 percent strikeout rate as of September 16. His awful whiff percentage, combined with a below-average chase rate, makes him a strikeout machine. Furthermore, a walk rate that ranks in the bottom fifth of the league has carried Haase to an OBP below .300.

His profile doesn’t really fit Comerica Park’s tendency to suppress home runs and relatively amplify doubles and triples, given that 84% of his hits are either singles or home runs. This gives him a very noticeable home-road split in OPS: though he hits to an .864 OPS on the road, a .686 home OPS weighs that number down heavily. All of this is also not to mention his status as a pure platoon player, as he boasts a .941 OPS against left-handed pitching but only a .684 OPS against righties. 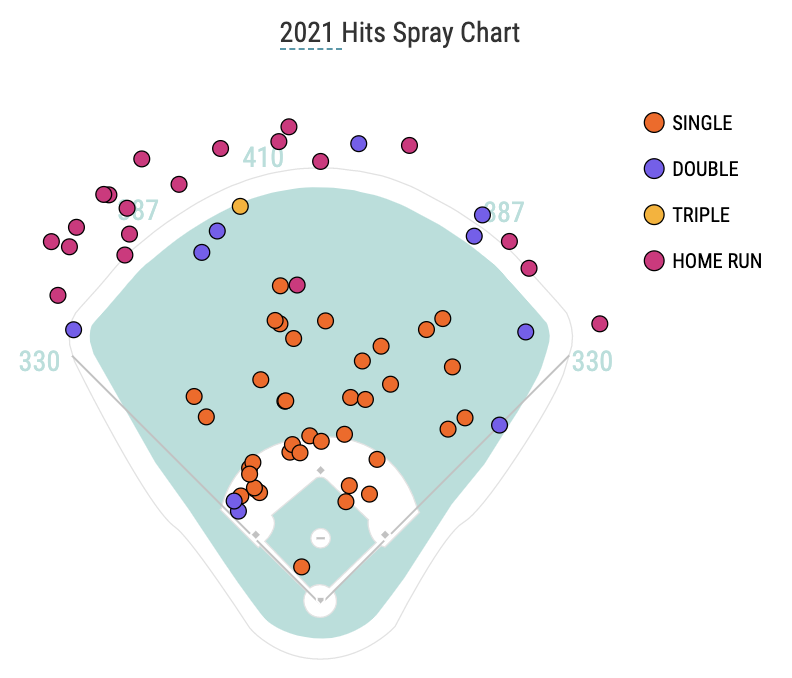 Additionally, Haase is not a good defensive catcher at all. Per Baseball Prospectus, out of 34 catchers that have seen as many pitches as Haase has from behind the dish, he ranks 30th in framing runs saved, 24th in blocking runs saved, and 24th in throwing runs saved. This puts him in 30th in fielding runs above average at the catcher position. There is no aspect of his game defensively at catcher that he does well. Despite this, his offensive value has been enough to allow him to be about a one WAR player this year. He is an average outfield defender, but his bat is not good enough to take away plate appearances from a better hitter.

With Jake Rogers undergoing Tommy John surgery and likely to miss most if not all of next year, the Tigers’ catching staff for 2022 seems bleak. When he does come back, he’s about as good of a pitch framer as Haase. Given the Tigers’ lack of MLB-ready organizational depth, Haase will likely suit up for his home team again next year. Grayson Greiner and his career 57 OPS+ will probably not be returning. Between a free agent veteran or Jake Rogers, the player most likely to take Haase’s spot after next season is 2020 second round pick Dillon Dingler.

Dingler tore up High-A with a 149 WRC+ in 141 plate appearances. A .342 BABIP seems to have ballooned that, though, as he has struggled offensively following a promotion to Double-A. Dingler has not struggled on defense, however, throwing out 18 of 40 would-be base stealers this year. He has flashed the ability to be a good all-around catcher that will be ready for the bigs around the 2023 season.

Along with the first watchable Tigers’ team in five years, hometown kid Eric Haase has, in part, allowed Detroit to embrace summer baseball again with an amazing June and July. Hopefully, he can take his offseason as a full-time major leaguer to better himself defensively and become more disciplined at the plate. If not, he will likely not be a member of the next version of the Tigers that can make it to the playoffs.