Home › Articles › Where Did Yu Go?

Where Did Yu Go?

On April 2nd, 2013, the Houston Astros were hit by a bus known as the Texas Rangers. The driver? Yu Darvish. In arguably the best game he has ever pitched, Darvish threw a perfect eight and two-thirds innings with 14 strikeouts, no walks, and gave up a single to Marwin Gonzalez (on maybe the only mistake he made up all night)—the last batter of what could’ve been history.

Darvish remained dominant for the 2013 and 2014 seasons with Texas until in 2015 Spring Training, he had bicep pain. He had an MRI taken and found out that his UCL was torn and he then underwent Tommy John surgery. He was out for the entire 2015 season and the beginning of 2016.

Many fans thought that in 2016, Darvish was not as good as before TJ surgery. However, the numbers suggest differently. According to Baseball Reference, Darvish had an ERA+ of 134—the second-highest of his career. Yes, he had a 3.41 ERA, the highest to that point in his career, but his FIP was 3.09 and WHIP was 1.116. Plus, his BB/9 was the lowest of his career to that point: 2.8. In fact, his strikeout to walk ratio was the highest of his career at 4.26. All of these point to having some bad luck and poor defense that, on the surface, made 2016 Darvish look much worse than he was.

Then, in 2017, Darvish is in the last year of his contract in Texas. Rumors are swirling all year long that he may be traded and finally, he lands with the Dodgers near the deadline. With Texas in 2017, Darvish struggled. And by struggling, I mean he wasn’t his normal, dominant self. Darvish was still an above-average major league pitcher. He had a 4.01 ERA and a 117 ERA+, but most noticeably, his K/9 ratio was down to a career low of 9.7—nowhere near he had put up in past seasons: 10.4, 11.9, 11.3, 11.8 by season to that point. However, imagine Yu, trying to deafen the trade noise. Texas is the only place he has ever pitched, the only place he has ever known in the U.S. At first Jon Daniels and baseball operations says he won’t be traded and then all the sudden he would be available at the right price. With that added pressure of performing well—either hoping the Rangers would hang on to him, or he could show his next team what to expect—Darvish pressed. He had one of his worst starts ever: 10 runs in three and one-third innings.

Then, he’s shipped to the Dodgers.

The Dodgers are known to be an analytical team and they were also on their way to a World Series run with Clayton Kershaw at the head of their pitching staff. Down the stretch, with those two things pushing Darvish to be better, he turned back into his old self. His ERA+ went up to 122, WHIP down from 1.168 to 1.148, FIP down to 3.38 from 3.99. However, most importantly, his BB/9 went down to 2.4 and K/9 up to 11.1—much more like his career numbers.

A dreadful Dodger postseason later, Darvish had been written off by many Dodger fans. Thinking he hasn’t been the same since Tommy John surgery, nobody seemed to want their team to sign him in the offseason. We all know the Cubs signed him for six years and $126 million, but what did the Cubs see in Darvish?

In all honesty, probably a little of this:

A repertoire of pitches that are all nasty weapons to be used in any count. With no analytics, anyone could tell you that those are great pitches and he throws all of them well.

The Cubs probably also saw a lot of this: 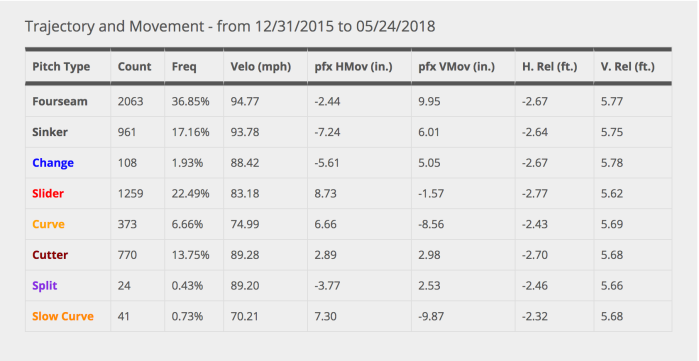 This is Yu Darvish’s pitch frequency, velocity, movement, and release points before and after Tommy John surgery from Brooks Baseball. You’ll notice, from 2012-2014 compared with 2016-2018, not a lot has changed. And most of the stuff that has changed is positive. Darvish’s velocity is higher for almost every pitch, and the movement has changed insignificantly besides the cutter. And it’s not that the movement change has been bad for the cutter, he has just turned it into a different pitch. It has more side to side movement than downward, now. Granted, take everything with a grain of salt here because many times his pitches are mixed up by pitch tracking systems like Pitch f/x or Statcast, because he has so many in his arsenal and he manipulates all of them to act differently. For example, Darvish is known to have a big, sweeping slider like this:

You’ll notice three of those GIFs are in Dodger uniform. Point being, Darvish’s pitches are dirtier than ever. The movement hasn’t changed.

My next thought was maybe his usage has changed. He has started using a fastball more or off-speed more, and it is working less. For those of you that are more visual, like me, here is Darvish’s pitch usage by year since his MLB debut in 2012:

What you see is that not a lot has changed. Yes, some of the lines move up and down, but not so significantly that it would suggest he is using his pitches any differently. So what about batting average against those pitches? Maybe batters have seen enough of Darvish that they are catching on. Here is a graph of the batting average against each pitch he throws each year:

The only thing that has changed is his splitter/sinker. (It’s kind of a splitter, kind of a sinker, kind of a changeup/circle-change when he wants it to be.) I’m not sure I believe the data that suggests that sharp rise in batting average against it because I think there are about five different pitches Statcast is counting as a splitter. Other than that, his four-seam is trending in the right direction. If there were to be significant differences, all those lines would be headed up in 2016-2018. Yet, some of them seem to be trending the opposite direction meaning hitters are having an even harder time against those pitches.

Anyways, the point I’m trying to make is, Darvish hasn’t changed. He still has a full repertoire of filthy pitches that he seems to manipulate any way he wants to make hitters look foolish. What has changed? His team, his coaches, maybe a bit of his pitching philosophy as he learns from different coaches. Will it negatively affect his pitching long-term? No. My advice to Cubs fans, MLB fans, and Darvish fans (as I am all of them, myself) is to relax. Take a deep breath. It’s been seven starts and only 34 innings pitched out of a six-year contract.

In an age where analytics and data have never been more prevalent in sports, especially baseball, it is important to remember that players are still human. They aren’t just numbers on some paper or stat lines on the internet, these are human beings. Humans need time to adjust to new teams, new coaches, and new environments as a whole. Nobody can get inside Yu’s head and decide whether he is comfortable or not and no coach can make him have confidence in his abilities. It is, and always will be, the player who will become comfortable and renew the confidence he has in his abilities.

Between his massive, nasty repertoire of pitches and data showing that not much has changed his entire career, I have faith in Yu. Yes, his BB/9 rate is up, his ERA is up, and his ERA+ is down, but they’ll all come back to his career levels when his confidence and comfortability do, too. And when they do, hitters better watch out—because a confident Yu is a dominant Yu.

So where did Yu go? Nowhere. He’s been here all along.